I swear this won't turn into all poodles all the time, but Fast stumped me: rapid? abstention? And then I realized that there is nothing speedier than Cici when she is breaking her fast in the morning and I could do both with one picture:

But then, I thought the speed with which she devoured a carrot nearly the size of her head was also fairly impressive, so
here's a bonus picture of my baby girl:
( Collapse )

I join a photo group... and my camera dies. Sigh. Never mind, I'm back in the game and have some catch-ups for you as well as this week's prompt. 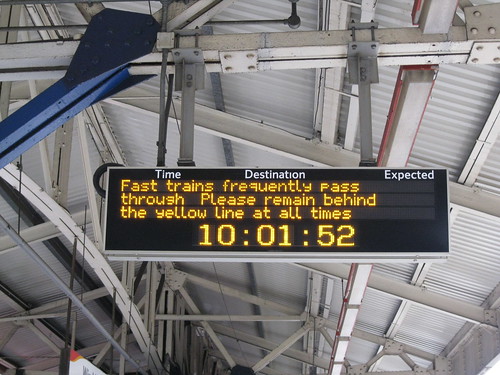 I live at a major railway junction, and though we get lots of trains stopping, we also have the fast mainline running non-stop through the middle of our station. When this says 'fast', it means it - definitely over 100mph much of the time. If you like trains, under the cut I've added three smaller pics to illustrate - one of what the mystical yellow line looks like, in case you can't imagine it(!) and two which are my best effort at capturing one of the fast trains in action.

Also my fills for heart and president. And now I'm all caught up!

Fast - we don't start to fast in the sense of eating less, or nothing, until next week - had this been the prompt for then, I would doubtless taken a picture of us tossing pancakes on Shrove Tuesday.

But, as it is the prompt for this week, I have gone with fast as in 'not slow'.

This is not a very good picture - but it should give you the idea. The small honey coloured blob is a very fast moving tiny dog - when I walk her for Mum I let her off her lead when we are within sight of the car. This is how quickly she moves when she is heading back to 'Mother' who has the car door open ready for her to leap in. I actually had the camera ready in one hand as I slipped her lead with the other - but she still got this far away before I had her in the picture and clicked!

I was undecided about this prompt. I've waited all week to see if I could get a new photo, but in the end had to go through the pics on the hard drive.

I was tempted by two photos... and this one won.

This guy was demonstrating sheep shearing at a craft show I went to. He sheared this sheep from wooly to bald in minutes - it was really impressive. Of course, he used electric shears on this occasion, but as you can see from the photograph, he had a number of old shears that the shearers used to use and from what he said, they were still pretty fast. He told us that the shearers used to walk from one station to another in Australia - many, many miles. And to keep their shearing hand in good nick, they used to flex the shears in their hand as they walked....