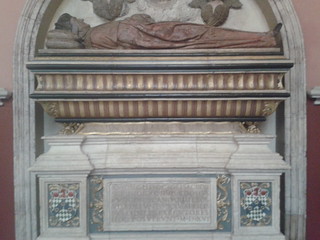 Well, it's a tomb, which is a fairly obvious remembrance. But it's quite interesting, because this tomb was in the Rolls Chapel on Chancery Lane, and the Rolls Chapel was demolished in the mid 19th century. On the spot was built the new Public Record Office, which was under the Master of the Rolls still, and so created a chapel for surviving memorials from the old one, and for Victorian Keepers of the Public Records too (they were the kind of chaps who had coats of arms which are duly in the stained glass). But this hasn't been the Public Record Office since the 90s, and I suspect wasn't really used as a chapel for a long time before that. These days it's an anteroom of Kings College London Library. But this 16th century gent, George Young I think from squinting at his epitaph, is still safely remembered despite his surroundings having changed completely.
Collapse