So, for bridge I offer a selection:

#1 - this is how we cross the river from Virginia to Maryland where I live. In lieu of an actual, you know, bridge. :)

#2 - This is what happened to the "bridge" across our stream last year. So again, this is not-a-bridge. :)

#3 And this is a little bridge across my make believe river in the front yard.

#4 A real bridge! I think I've shared this one before for "tower", but it was the only real bridge I could find easily. I thought I had a picture of Iron Bridge, but I guess my hubby must have taken all those pics. *sigh*

And the subject for this week is Bridge.

You know that feeling while travelling, when you don't know what you're looking at? This is a footbridge in Narbonne, from the side with the cathedral and Bishop's Palace, to the... well, the other side. Which, according to this bridge, is a whole nother town (literally: "Footbridge between two towns"). Except it isn't. It's just...more Narbonne. 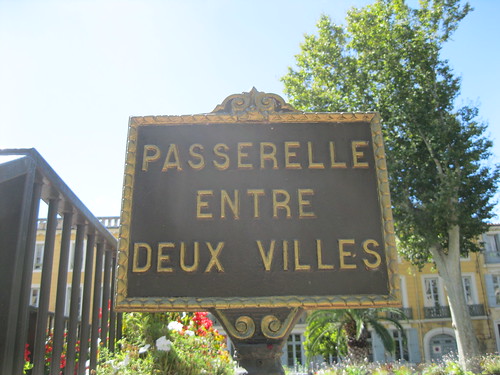 Very odd. I don't really understand it. The river in Narbonne is *not* pretty, canalised and sludge green, but it's reasonably large. Maybe the other side used to be an Oltrarno, an Outremeuse, a Rive Gauche, but it doesn't seem to have a special name now. There's one other bridge across, one of those with shops on that is supposed to be picturesque and ancient - but this one is so solid with chainstores you can't tell you're on a bridge at all. Most river towns, especially ancient ones, have river views as a feature. Not this one. Below the cut, a proper view of the bridge which is as pretty a view as I could manage!