... are no stairs, but you climb them all the same.

Plenty of stares in the zoo... 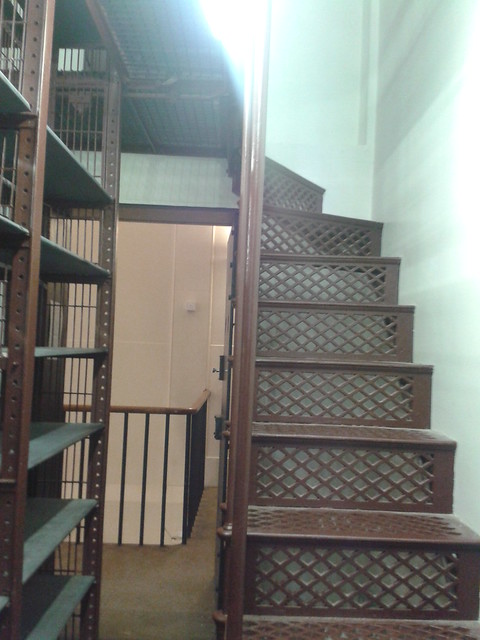 An unassuming set of metal stairs, yes? Well, sorta. But they are part of one of the first ever attempts to build a repository to keep stuff *forever*. It's the first Public Record Office building in the UK, now part of Kings College London library. Most of the original furniture is swept away by the needs of a modern library but they have preserved a couple of corners. Here you can see the building is largely metal in its fittings (metal and slate in the strongrooms, in fact). They were trying to design a fireproof place where the oldest documents in the country could be safe. It's also not solid, full of grilles (including the mezzanine floor where these steps lead): the idea was to avoid creating mould pockets (get that air circulating), and let any dust fall down to the ground where it could be regularly swept up. Dust is a preservation enemy too, in a more subtle way than fire.

We wouldn't do it like this now, but I'm so glad I had the chance to get in to see it last Open House London.
Collapse